1. Juice the lemon and orange. Save the juice and the peels, and put them in a six-quart stockpot. Add the rest of the ingredients, and bring the pot to a boil on medium-high heat. Add the pears cold, and when the pot boils again, reduce the heat to a gentle simmer.

2. Cut a round piece of parchment paper, and lay over the poaching liquid to completely submerge the pears. Cook for 30 minutes, and then test. A knife should meet very little resistance when pushed into the bottom of the pear. Keep checking every 10 to 12 minutes until the pears are fully poached.

3. When the pears are done, place them gently into a glass bowl. Pour the poaching liquid on top to completely cover them. Use the parchment paper to submerge the pears, and place the bowl in the fridge overnight so the pears become dark purple and full of flavor.

1. In a bowl, whisk together the salt, sugar, and flour to combine. Chop the cold butter into small pieces. Transfer the flour mixture to a food processor (you can do this step by hand as well, if you wish). Sprinkle the butter pieces evenly over the flour. Pulse the machine until the mixture has the texture of coarse, wet sand.

2. Pour the mixture back into the bowl you used for the flour, and pour most of the water over the flour. Using your hands, gently squeeze the mixture until it forms a dough that sticks together. If it’s too dry, keep sprinkling water into the mixture a bit at a time until it feels like dough. Cover the dough with plastic wrap, and let it rest for 30 minutes in the fridge.

3. Pull the dough out of the fridge, and gently knead 12 to 15 times until the dough is somewhat smooth and workable. Roll out the dough on a lightly floured surface to a quarter-inch, and place over a 10-inch tart shell. Gently press the corners in, and form the dough to the shape of the tart shell. Poke a bunch of holes in the bottom of the dough with a fork (they’ll keep it from bubbling up). Using a knife, carefully trim the excess so the dough is level with the top of the tart shell. Cover in plastic, and chill for 30 minutes. 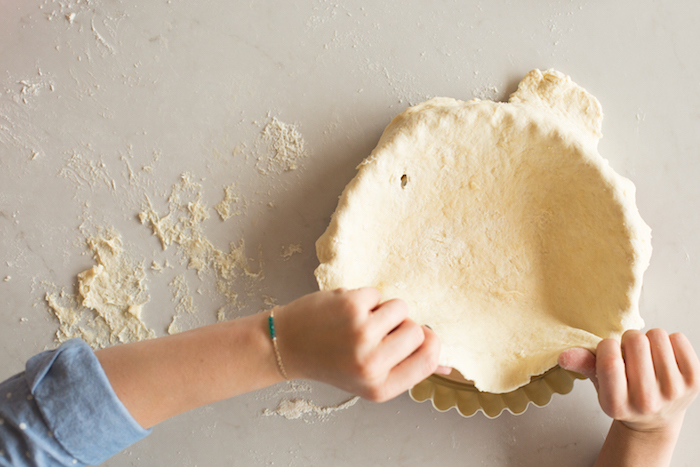 4. Heat the oven to 375°F, and bake for 20 to 22 minutes or until the dough is golden brown. You won’t bake it anymore, so bake until finished. Let the tart cool for five minutes in the shell, then unmold. Let cool completely on a wire rack.

5. Toss the pecans, egg white, salt, and powdered sugar until the sugar is dissolved and the nuts are coated. Bake at 325°F for 12 minutes or until you can see the egg whites have bubbled and turned light brown.

8. Slice the pears in half the long way. Remove the core, then slice them a quarter-inch thick. Spread the cheese mixture on the bottom of the tart shell. Arrange the pear slices in concentric circles around the tart shell, completely covering the cheese filling. Bust up the pecans a bit with the end of a rolling pin. Sprinkle the pecans over the pears. With a pastry brush, liberally brush the top of the tart with apricot glaze. Cover everything, and chill the tart for 45 minutes before serving.

Duff has been cooking since the age of four, and it was no surprise when this young enthusiasm led to a life devoted to culinary pursuits, including many roles in front of the camera. Off-camera, Duff is the proud owner of Charm City Cakes in Baltimore, Charm City Cakes West in Los Angeles, and Duff’s Cake Mix, a do-it-yourself cake shop in the heart of Hollywood.